"i think there is always hope." 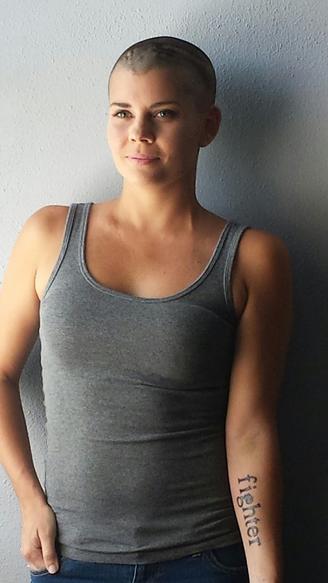 "On March 14" (title of Michelle's book) 2014, Michelle Boyd DeJong was diagnosed with an inoperable brain tumor. Because the tumor is located on her brain stem, its position was blocking the normal circulation of cerebral brain fluid, which resulted in pooling an increased pressure. An endoscopic ventriculostomy and biopsy was performed on March 17, followed by the insertion of a left ventriculoperitoneal shunt on March 27 and its subsequent revision on June 23.

Released from Moffitt Cancer Center the day after her shunt surgery, she made a quick recovery and promptly sneaked out to have her forearm tattooed with the "fighter" logo. The prescribed 42 days of temodar (chemotherapy) and 33 radiation treatments started on April 16th.

During the week between brain surgeries Michelle realized that there was only one way to face this challenge and it is the same way she has approached her life: with a positive and selfless attitude focused on using her experiences to help others. The "fighter" mentality that she embodies is so much more than a battle against her brain tumor. More importantly, it is a daily initiative to inspire others through action and attitude. This begins with a personal conscious decision and ends with changing lives.